Posted at 13:27h in The Bulletin by iObc6waP5rB

The BMW iX1 electric crossover is confirmed for a South African introduction, and it’s already listed on the company’s local website.

However, there is so little information available about this vehicle that BMW South Africa said they would like to tell us when it’s launching, but they themselves are not sure.

There are no formal press releases that tell us what the iX1 will offer, and only spy shots and fan renders that show us what it might look like.

BMW South Africa did say that its electric releases for this year will encompass the i4 M50, iX3, and i7 – so it’s likely the iX1 will only be seen on our roads come 2023.

As such, we delved into the world of online speculation to see what’s available on the new electric crossover, and this is what we found.

The BMW iX1 is based on the brand’s entry-level SUV/crossover, the X1.

Keeping in line with its petrol-powered siblings, the iX1 will be more affordable than the larger iX3 – the latter of which is going on sale in South Africa later this year at R1,290,000.

According to BMWBlog, the iX1 will be the replacement for the longstanding i3 electric hatchback.

It is expected the iX1 will initially be available in a front-wheel-drive configuration with under 150kW of power, as well as in all-wheel-drive guise with around 186kW.

Although similar to the new 7 Series, there is a possibility that the battery-powered iX1 will be the flagship of the next-generation X1 line-up rather than a standalone model.

BMW then forecasts the driving range of its new electric crossover to be between 413-438km at an energy consumption rating of 17.3-18.4kWh/100km.

The battery pack is therefore estimated to have a capacity between 74-80kWh – which is very close to that of the iX3.

In terms of charging, the iX1 is built on a 400-volt battery system and is expected to support the same charging speeds as the existing line-up of electrified BMWs, going up to 200kW, writes TopElectricSUV.

At these speeds, the iX3 gains over 100km of range for every 10 minutes of charge, which is probably what the iX1 is will be capable of, too.

The below infographic shows BMW’s plans for electrification over the next few years. 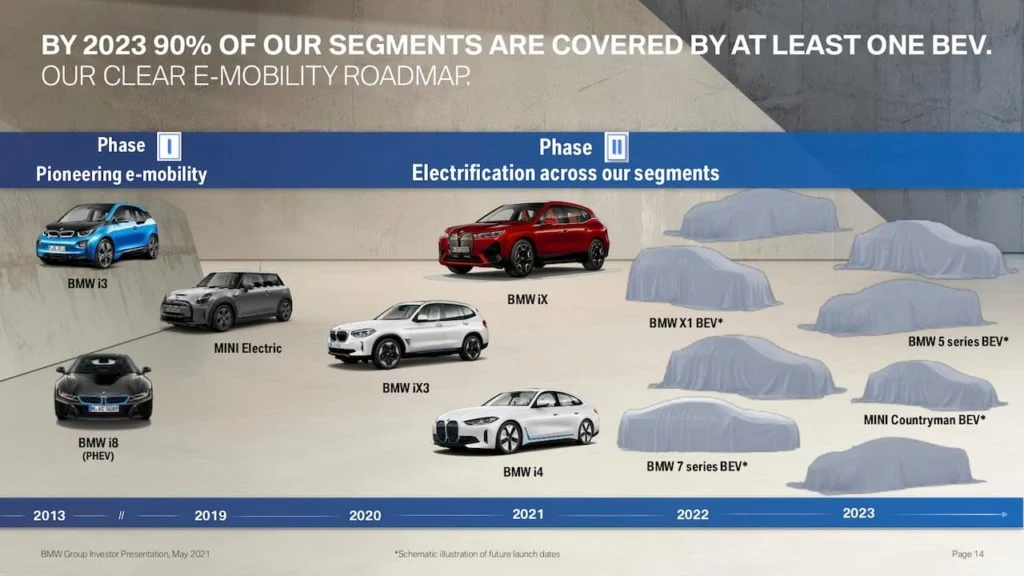 Spy shots by Motor1 in early 2022 show the iX1 in heavy camouflage, with only the windshield, wing mirrors, and wheels fully exposed.

Unfortunately, these are the best photos that have surfaced thus far.

The car in question closely matches the silhouette of the standard X1 and it has “electric test vehicle” emblazoned on the door, making it a reasonable assumption that what we’re looking at is, in fact, the iX1. Compared to the X1, the battery-powered model seems to have unique front and rear bumpers, a steeper rear window, and a grille with a large black sensor in the middle – which is usually a sign of advanced driver-assist systems.

Additionally, the door handles on the iX1 are almost flush with the bodywork and the lights have a distinctive new pattern, none of which are present on the current X1.

With a very limited view of the interior it’s difficult to predict what this BMW will offer in the features department.

Under the camouflage, it seems that a large infotainment setup is present, which mimics the rectangular displays of most other BMW i-branded vehicles currently on the market.

However, there is no unobstructed view of the iX1 in all its glory, and the below render by SRK Designs we think is the best depiction of what it might look like. “Starting at the end of the year, the new iX1 will be our fully electric offer to customers in the high-volume premium compact segment,” said BMW CEO Oliver Zipse in March.

The EV will be built at the Regensburg facility in Germany, with the first models expected to roll off the line in November.